History of Hippies in Goa (India) I forwarded my previous post ("The First Hippie in Goa") to a listserv on Goa research. Some subscribers there asked for more details about the history of the hippie scene in Goa, and particularly Colva. This is a beach in southern Goa that no longer belongs to the techno trance scene.

Colva beach was indeed the first place chosen by a handful of hippies upon arrival in Goa by the mid-1960s. But "Eight Finger" Eddie soon moved to South Anjuna, as he heard about the beauty of that unknown place. In his mid-40s, Eddie already was a popular veteran. Consequently, many Western youngsters soon followed suit, also settling down in Anjuna beach, which is where the "Goa scene" actually started.

Local natives recall that hippies chose Anjuna because there was no police station in the area. The closest station was located miles away southwest, beyond Mapusa town. Therefore, hippies could enjoy the necessary peace to do drugs, without having to pay baksheesh (bribe) at every corner.

Moreover, one native family was pivotal in the early Anjuna scene. In a region where most of the population only spoke Konkani, Joe "Banana" Almeida spoke very good English - an important factor for global travelers. Joe and his family have just returned from Kenya. They had opened a simple restaurant which also provided a variety of ancillary services for hippie newcomers. It was logical that hippies would gather around his restaurant (currently run by his son Tony), still located in South Anjuna.

However, with the ongoing modernization of Anjuna since the 1990s, the emerging techno trance scene was gradually pushed north. It moved towards the villages of Chapora, Vagator and Arambol. Original Anjuna followed the steps of Baga-Calangute tourist strip, which caters to charter tourists from India, Russia, UK and Scandinavia. In the meantime, the Goa trance scene is still fleeing farther north and elsewhere...

In any case, it is important to ask: among various suitable places in India, why did hippies choose northern Goa? They could have well settled in Gokarna village located in the coast of Karnataka state (towards the south), or in Pondicherry, former French colony on the east coast of India. Two critical factors must be pointed out:
For anyone devoted to finding causes and origins, I'd say that some of the initial decisions made by hippies and Goans back then were purely incidental, often based on individual whim and preference.

It is the ensuing snowballing effect that has an impact on the collective. The location and culture of a host society, combined with the needs of guest travelers, will define the rise of a subcultural scene at a given time. Feel free to post your comments. 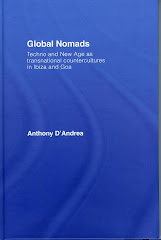